DB0BUL - my SVXLink EchoLink system. Since there is not really a good link in the region of Burglengenfeld, and since I always wanted to do experiments with EchoLink, I started off and developed my own little system. The license has been officially granted by the Bundesnetzagentur according to § 13 AFuV as an autonomously operating radio station.

It is not the best QTH I could imagine, but that was not so important for me. I just wanted to conduct my experiments and be able to contact my local buddies.

The development goal was to create a machine that consumes as little power as possible. I started off with some very small platforms like the

I don't want to accept that such an installation needs to consume the awful amount of 200 or more watts just to forward an audio stream with very limited capacity to the sound subsystem. Using regular PC hardware with Windows on it is really like shooting sparrows with cannonballs.

So here are the links to the development projects:

The Echolink subsystem I am using is SVXLink.

There is no Ubuntu deb package yet, but the compilation instruction works quite well. Yet, the init file that comes with the code tarball is crap. I had to write my own.

For more detailed information on the Echolink system itself, please have a look at the pages of DF2NU: http://www.df2nu.de/ 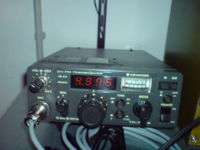 My reliable Kenwood TR-7625 does this job. It is a very reliable, easy to repair mobile transmitter with not so many switches and no menus at all and will do this job just perfectly fine.

The Antenna is still a Diamond X6000. Since I have been using it as my main antenna for VHF/UHF/SHF, I will provide another one. It will be a Diamond X-50, which is just perfectly fine for this experimental station.