DB0BUL will see a major redesign this year. It will sum up several changes and innovations that have come over the past year:

Historically, DB0BUL was an Intel Atom computer that still consumed a lot of power.

The layout of the first stage of the project is described here: The Echolink Node DB0BUL

The wish to save power and costs resulted in the creation of a 19" rack with a Seagate DockStar based computer. It was the first kind of freely avalable embedded computer for a reasonable price that could be operated ob a Linux basis.

And also the sound card / Transceiver interface made it into a 19" rack based component:

2.3 Upgrade to a Raspberry Pi

After about 10 years of seamless operation, the node failed for an unknown reason, so there was an upgrade to a RaspberryPi based solution.

Unfortunately it didn't work for a long time, because I used standard off the shelf SD cards, probably TLC kind of devices. I promise you, I will never do that again!!!! 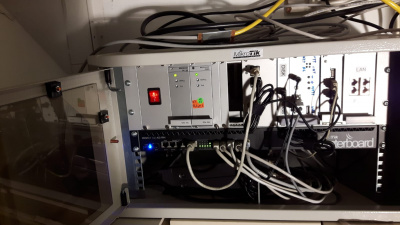 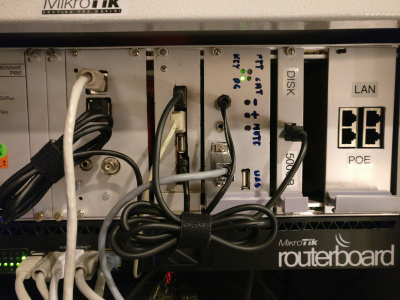 The Upgrade to an Odroid XU4Q was motivated because of my Es'HailSat Experiment: I wanted to provide a reception possibility for EsHailSat and make it available over our HAMNET node.

I am using the pre-installed image as it comes, do some upgrades to the installed OS, but not invest that much time. The device will finaly have a fixed IP address inside of HAMNET:

and will be reachable as

Powering this little device is qHere is the board that carries the mini computeruite challenging: Using a 2A standard USB PSU will not do, the power supply that comes with it is rated at 4A, so I decided to use some bigger DC converter to attach the computer to my 12V rail.

The DC converter I used is a Cosel ZUS251205 DC DC converter that is rated at 25 Watts (5 Amps @5V) and can work with an input voltage of 9-18 Volts. Here are the documents. I decided to host them because the converter is end of life at Cosel.

Note that I have just used one single USB3 connection to the front panel. In the moment I just have a USB 2.0 hub built in from mthe last hardware interation, but since the rack is so modular, it will be super easy to replace it with a USB 3.0 kind of counterpart.

Since the standard interface to the front is USB, I am also using the other standard USB devices such as the transceiver interface for Echolink. 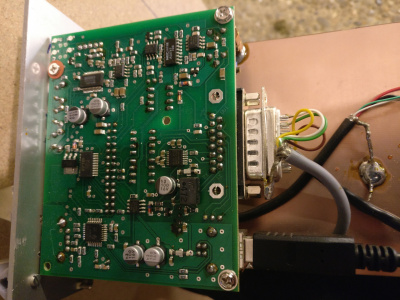 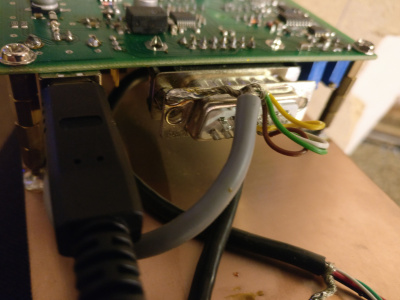 Together with the ODroid and in comparison to the Raspberry Pi Platform as decribed [[Upgrade to my SvxLink Node|HERE], the audio architecture is a little different, but the interface to the transceiver interface is identical:

And the following pages are still helpful:

The old Mikrotik RB411 somehow went End-Of-Life, and since it originally used to serve as the main link to DB0MHB, which is being served by another solution for almost 5 years now, it was time to remove it and replace it anyway.

The old base, a Mikrotik Metal 5SHPn, also went out of service and since the Metal is a good device for all sorts of fun, it will be used for new things in the future.

The replacement is a Mikrotik wAP60G bridge, capable of transferring 1 Gigabit / second, which is a tremendous bandwidth.

Allegedly it works also for distances up to 200 meters, but I didn't try that. For now I am very content.

It is interesting that the devices can also measure the distance and the exact angle from each other. Well, the 6mm band has a wavelength that allows for some mighty precision!

2.7 Connection between Odroid XU4 and USRP2

This works fine! I am connecting these two little boxes through the Mikrotik RB2011UiAS-RM, on the first five ports, where the RB2011 does gigabit. I want to process the stream from the USRP really fast.

In order to feed power into the USRP, I built an injector (photo below). The backplane gives me 15 Volts, but the USRP needs 6 Volts, so I used a highly overdimensioned DC converter (capable of doing 10 amps), together with a fuse and some control LEDs. 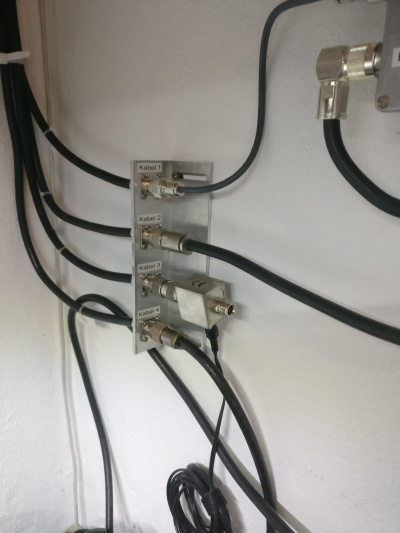 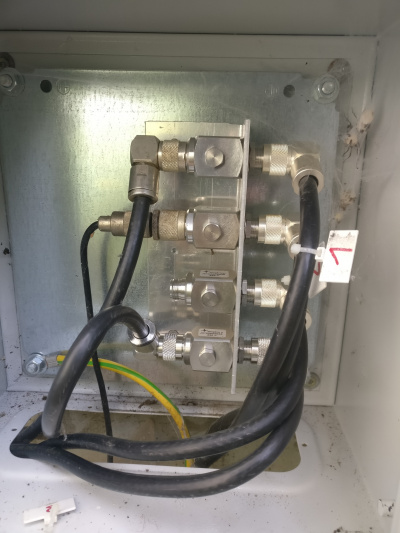 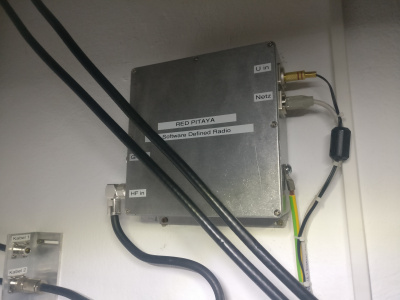 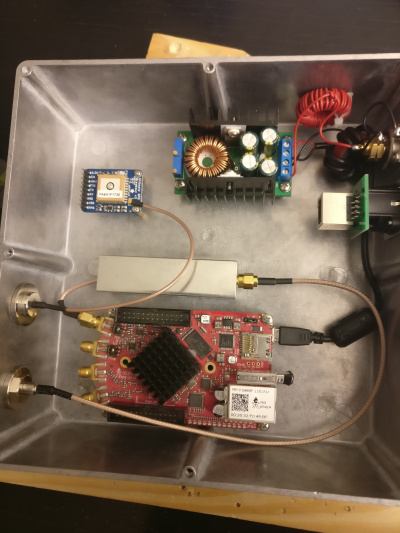 The BICC Vera Monovolts have proven to be extremely robust and super reliable. They're not cheap, but good. 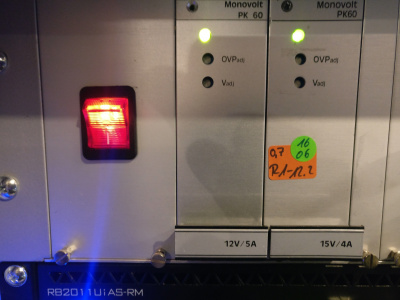 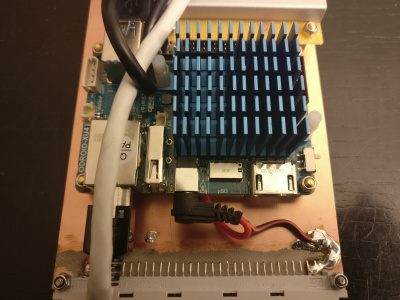 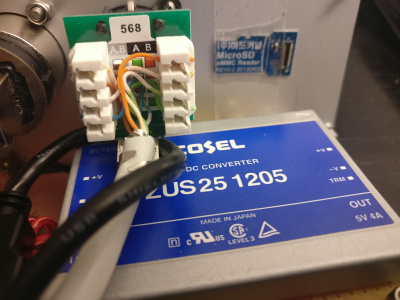 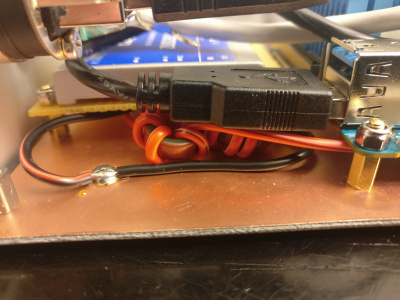 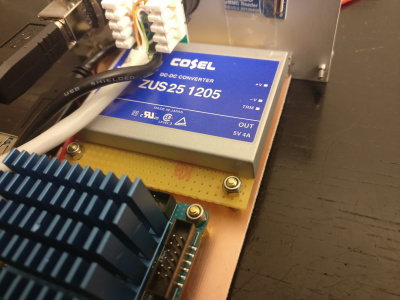 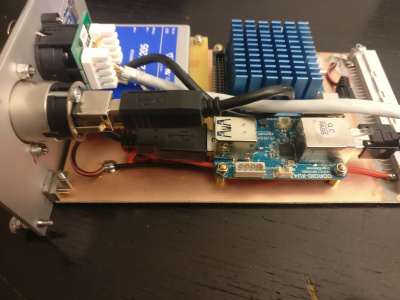 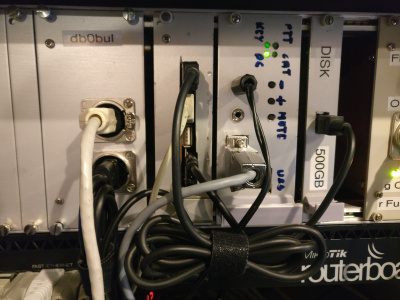 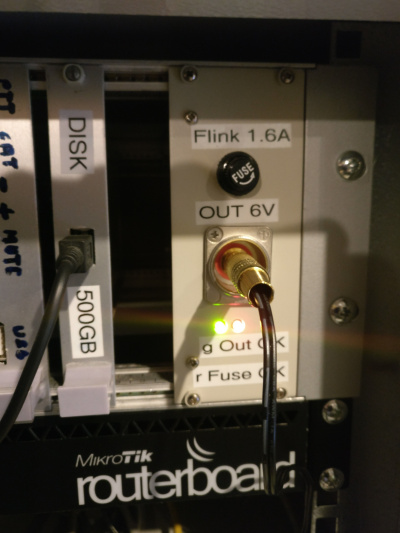