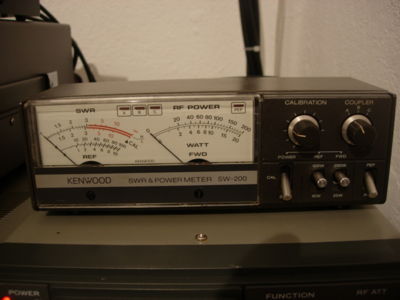 The Standing Wave Ratio is the "ratio of the amplitude of a partial standing wave at an antinode (maximum) to the amplitude at an adjacent node (minimum), in an electrical transmission line." For a neat definition go to the original Wikipedia Pages on SWR.

Quite plainly you can define it as the ratio of the transmitted power flowing from the transmitter into the antenna, compared to the reflected power which the antenna cannot consume and convert into radiated power.

A bad antenna which is not in resonnance with the signal fed into it will reflect much of the input power back into the exiter (=power amplifier), causing many unwanted effects like arcs due to voltage overlays and enormous currents exceeding the specifications of many components. A short circuit somewhere in the feeding line has exactly the same effect, reflecting the vast majority of the emitted power. In short, your power amplifier may simply cease to work. In case of overheated transistors, this may happen rather silent, or in case of exploding capacitors, it may be a rather audible event.

If you want to prevent this, you need a small measuring device which tells you how much of the emitted power flows back. Many transmitters can stand SWRs of 1:1.5. Valve transmitters may even stand SWRs of 1:2, but above is very critical anyway. Off course the bad effects come from the voltages and currents in your amplifier, and if you limit yourself to 5 watts on a 100 watt machine, you can probably afford to unplug your antenny entirely while transmitting. Or you can pick any copper rain gutter as an antenna. But yet be careful: A short curcuit once caused the grids in my TS-520S amplifier valves to melt!!!

Yet, there's another trick: If you use an antenna tuner in your feeding line, it will eat up the reflected power and keep it out of your amplifier. In my case, I have a built-in antenna tuner in my transceiver which does the job anyway.